She began to play the harp at the age of 17. Within a few years she be 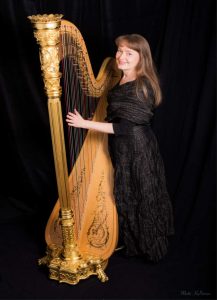 came first harpist in the Helsinki Philharmonic Orchestra – one of the best orchestras in the world.

Tell me about your earliest musical memory

The first thing that pops into my head is a cassette tape that belonged to my mother. It was a recording of the Mozart Symphony No. 40. I remember how much I loved listening to it. We had a small collection of cassettes, but we couldn’t listen to any at home because we didn’t have a record player. My mother was a first and second grade school teacher, and in her classroom she had a tape recorder, so we could listen to the recordings there. I remember the classroom also had a projector, and we would project pictures from different books on the wall to go along with the music. I remember doing this with Peter and the Wolf as well.

So when did you start to play?

When I was 9 my mother asked if I would like to attend a Kantele summer course. Kantele is a traditional plucked string instrument. My mother couldn’t learn to play an instrument, so she really wanted her children to play.

Well, music was not of great importance to them. It was not a tradition in her family, and she was very regretful about that. She would have loved to play.

At first I only had Kantele lessons during the summertime. It was a two-week course during the summer, and we had to wait until the next summer to continue studying. It wasn’t much, so my friend and I started studying in music school as well. We studied the flute and the clarinet, and later on I also played some bassoon, because the wind orchestra in our school had a bassoon shortage. In one of the summer courses we met a Kantele teacher from the Espoo Music Institute and she was very impressed by us, as we were by her, and she invited us to take lessons in the Espoo Music Institute, very close to Helsinki. We had to travel 550 kilometres twice a month to take lessons with her. We would hop on the train in the evening and wake up in Espoo in the morning, stay for the weekend and then hop on a train back home to arrive at school on time. This was when we were 13. We also joined a Kantale group we could perform with, so we were able to earn some money to cover the travel costs. We performed with this group outside of Finland as well: in China, in Canada, in Cyprus and in other countries. It was very interesting for me as a young girl.

Cyprus is very close to Israel

Right. We were there for a week, performing in different venues.

And when did you start playing the Harp?

I was invited to a concert by a flute and harp duo. I remember it was a very cold winter night, about minus 39 degrees, and the car wouldn’t start. We had to travel by taxi, and it was very difficult to find one, but eventually we got to the venue. I remember that night as the night I fell in love with the harp. The following autumn I was already enrolled as a harp student in the Joensuu Conservatory. I was 17 then. I had to travel 100 kilometres to get to my lessons, and also in order to practice, as I didn’t have a harp at home. At least every week I would make this journey. In my second year there, my teacher lent me one of her harps, so I no longer had to travel in order to practice. At this point, I would travel to Joensuu for harp lessons, to Espoo for Kantele lessons in addition to teaching Kantele at the music school. It was a very busy time. I don’t know how I was able to juggle all of this as well as my schooling, but perhaps when you’re young you have more vigour and enthusiasm to help you through.

So you started playing the harp quite late. When did you decide you were going to play professionally?

I only started thinking in those terms after about two and a half years of playing the harp. I was studying at Tampere conservatory and got to play Puccini’s La Boheme in the student orchestra. It was the first time I ever played in an orchestra. Before then, professional harp playing seemed like a distant dream, but after playing that piece I felt like the dream was beginning to come true. I started thinking – perhaps I really can be a professional harpist. I began practicing more as well, the La Boheme harp part is pretty difficult. It’s a two-hour piece.

After that, I enrolled in the Sibelius Academy, where I studied with the first harpist in the Helsinki Philharmonic Orchestra. Two years later I met harpist Willy Postma and transfer to study with her. Willy lives in Trondheim, Norway, and so I travelled there for these lessons. I was then hired as co-principal harpist in the Finnish National Opera. I worked there for two years. It was very busy in the orchestra so Willy advised me to take a leave of absence from the opera and to be her substitute in Trondheim, so I could concentrate there more on studying solo repertoire. I then came back to work for the National Opera, but in 1999 my former teacher retired from the Helsinki Philharmonic Orchestra. I went to the audition and got the job.

So now you had multiple jobs to juggle

True, but not for long. Holding two first-harp positions was impossible, of course. I now had to choose between symphony and opera. In the end, I chose the Philharmonic, because I wanted to combine orchestral playing, teaching and solo performance. I also wanted a varying repertoire – to change it up every week, and the opera doesn’t offer that. I did love the opera very much though. There was a good atmosphere there, and the music… Oh how wonderful! In any case, I made the right choice for me.

Tell me about what we are going to hear in your concert here in Israel. You have been gathering piano pieces by Finnish composers and transcribing them for harp. How did this project come about?

In fact, there aren’t many Finnish pieces originally written for harp in the time between 1890 and 1930. I started transcribing different Finnish pieces for harp after this party I was playing at in Karelia, Finland. I was asked to play Finnish music on the harp, not the kantele, and I didn’t have anything to play. The Finnish music I did play until then was mostly very modern and not appropriate for the event, and so I opened a Finnish piano music book, and chose a piece by Oskar Merikanto. I played it, and I thought to myself – why shouldn’t I transcribe more Finnish piano pieces for harp? It’s very pretty music. After ten years, I had dozens of transcribed pieces. I wrote my transcriptions on vacations and in the summer holidays – it became my main hobby. Back then I had to find the original material first, buy a lot of sheet music and visit many music libraries. Today it is all much easier thanks to the internet, but it was ten years ago that I had the idea to publish some of these transcriptions in a book, or even record them on a CD. Only last year this idea began to become a reality. It’s been hectic, but now the book and the CD are coming out, and I will be able to bring them with me when I come to Israel. The book and the CD feature music by Sibelius, Merikento and many others.

This is a good time to mention that both the book and the CD will be available for purchase at the venue before and after the concert, and that additional information about them can be found on Annie’s site: http://anniharp.com/.

It was in Lapland, near Rovaniemi. I was giving harp lessons and workshops to a youth orchestra, and we were performing in a theatre on a mountain top, that had a narrow, wooden, kilometre long bridge leading up to it. It was very scary moving the harp there, because the trolley was exactly as wide as the bridge itself. If the harp had fallen over, it would have been completely smashed. In the end, we managed to move four harps there and back. In the concert itself we played harp quartets, trios and solo pieces. It was fun. Fun and scary.

Another interesting performance I had was in a chamber music festival in Kuhmo. We were playing Conte Fantastique by Andre Caplet. My thumb was very dry and sore, and right in the middle of that bloody piece, it tear opened, and my blood started dripping on the harp… It was a nightmare! The story of the piece itself is suitably unpleasant and gruesome though. It’s based on a story by Edgar Ellen Poe, “The Mask of The Red Death”.

Final question: With which composer would you most like to have a cup of tea?

Maurice Ravel. I would have asked him to write a harp solo piece. I love his music so much, and he writes so well for the harp.